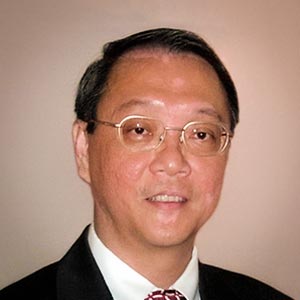 Aaron Chia is a Client Relations Partner at Aligned Growth Partners, where he covers business development, management leadership and training and development. Based in Singapore, Aaron is also responsible for client development initiatives for the firm in South East Asia region.

Aaron Chia started his career in the Republic of Singapore Air Force (RSAF), specialising in stand-up training and instructional design before moving on to an outstanding 23-year career with Parker Hannifin Corp, where he rose to the position of Senior Regional Manager, growing the company’s sales by 5,000%. He also established two plants and built great business relationships at all levels with electronics manufacturing giants in ASEAN, India and Australasia for the Chomerics Global Division of Parker Hannifin Corp.

Aaron joined Parker Hannifin Corp in 1997 as a Territory Sales Manager covering the ASEAN Region for the Chomerics Asia-Pacific Division. Parker Hannifin Corp is a US-based Fortune 250 company with $15 billion in sales annually. Parker Hannifin Corp’s Chomerics Division sells specialty materials for electronics, which includes mainly EMI (electromagnetic interference) shielding materials that protects devices from electromagnetic interference, as well as thermal management products that helps transfer heat out of electronic devices. Aaron was Parker Hannifin Corp’s first employee for the Chomerics Asia-Pacific Division and his pioneering work for the division saw him growing the company’s sales from $400,000 in 1997 to $7 million in 2004. Aaron’s responsibilities included coordinating and implementing sales programs and strategies between Asia, US and Europe, as well as conducting seminars for customers on the application of Chomerics’ materials. Aaron also represented Parker Hannifin Corp’s Chomerics Division in major exhibitions and trade shows globally.

In 2004, Aaron was promoted to become the Regional Manager of ASEAN, India and Australasia for Parker Hannifin’s Chomerics Division. During that time, he started and grew Parker Hannifin’s business in a new market – India, as well as overseeing the set-up of a new plant in Chennai, India. He managed 6 sales/applications managers and grew sales from $7 million in 2004 to $12 million in 2007. He also gave feedback to Parker Hannifin’s Chomerics research and development departments on customer needs and industry trends to drive the Chomerics Division’s efforts in developing and manufacturing new materials to meet customers’ and the industry’s future needs.

In 2007, Aaron became the Senior Regional Manager for Parker Hannifin Corp’s Chomerics Division for ASEAN, India and Australasia and Business Manager-Designate for the Medical Services Division (MSD) in Asia-Pacific. Aaron helped execute the acquisition in 2008 of Emitherm Sdn Bhd, the Chomerics Division’s largest distributor in the ASEAN Region and helped integrate that factory into Parker Hannifin Chomerics Malaysia’s plant. As a senior regional business manager, he built great customer and business relationships with senior executives of major global electronics giants and coached his staff successfully so that the company grew sales from $12 million in 2007 to $20 million in 2018. Aaron also established distributor agreements and strategies in selling thermal and EMI shielding materials. As a result of his excellent performance at Parker Hannifin, Aaron was handpicked by the Vice President of Sales of Parker Hannifin Seal Group to help explore the possibility of setting up the Medical Services Division in Asia.

Before he joined Parker Hannifin, Aaron worked as a sales manager for MicroPackaging Industries Pte Ltd where he developed and managed new and existing accounts. He worked with US, Japan and Taiwan manufacturers and principals on selling and marketing their products and grew MicroPackaging Industries’ sales in a wide range of specialty materials for the electronics industries from $800,000 in 1995 to over $3.2 million in 1997.

Aaron started his career in the Republic of Singapore Airforce (RSAF) as an aircraft technician in 1979. In 1981, he was selected to join a Project Team which received training in NEC Japan and returned to set-up a Secondary Surveillance Radar in an airbase. From 1982-1984 he was an instructor in the Radar and Communications Section of the RSAF’s Air Engineering Training Institute (AETI), where he trained staff to repair avionics equipment and implemented NATO military specifications to their repair work, resulting in annual cost-savings of several million dollars for RSAF. In 1984, Aaron became the Head of Microwave and Radar Training Section, where he led a team of instructors and staff to conduct Microwave/Radar courses. Aaron was also a lecturer for the RSAF/Ngee Ann Polytechnic Joint Diploma Program on Microwave and Radar and was seconded to Singapore Polytechnic in 1986 to conduct the Intergraph/Prime Computer-Aided-Design courses under the RSAF-SP exchange program. Aaron’s final position at RSAF was as a Senior Training and Project Manager in the Training and Development Section, where he led a team of training managers in the instructional design of training audits, organisational development and human resource management courses.

Be in touch with us

Your information has been sent successfully.